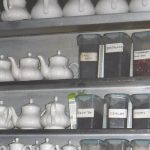 Choose from 10 varieties and accompanied with one of our home-made scones with jam & cream is a must.

Many other teatime accompaniments, toasted tea cakes, a selection of home-made cakes, fresh cream cakes – far too many to list.

In the late 17th century there were coffeehouses in English towns.

Cocoa also came to England in the late 17th century from Central America.

We serve all three to this day.